My first exposure to homomorphic encryption was reading a blog post by Bruce Schneier. He highlights that normally we want encryption algorithms to “look” random:

Assume you have a plaintext P, and you encrypt it with AES to get a corresponding ciphertext C. If you multiply that ciphertext by 2, and then decrypt 2C, you get random gibberish instead of P. If you got something else, like 2P, that would imply some pretty strong nonrandomness properties of [the encryption system]

Mazza et al implemented a limited version of ray-tracing in “Homomorphic-Encrypted Volume Rendering”. While this raytracing system can’t support reflections, it can be used to render X-rays/CT scans without leaking patient data. This can be done because a ray can “accumulate” all the material it intersects with using only addition.

Based on my searching, it seem that Microsoft’s SEAL library is pretty popular. Microsoft also provides a higher level interface called EVA. However, EVA requires building from source while Pyfhel is a python interface for SEAL that is already published on PyPi. So for getting up and running quickly, I chose to use Pyfhel. 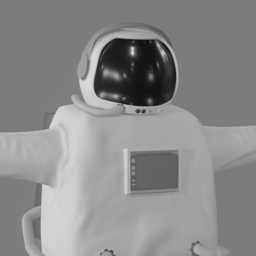 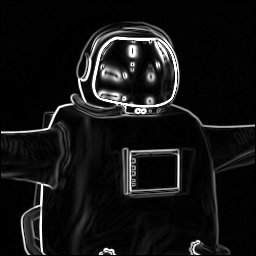 Microsoft’s EVA repo has an example of edge detection implemented over an encrypted image. I wanted to reimplement this in a true client/server model to have separation between process that knows the secret key and the process that doesn’t. I published my code at azeemba/homomorphic-encryption-testing.

I first implemented the edge detection algorithm (which honestly was very cool on its own). After parallelizing the algorithm, I was able to analyze a 512x512 image in 0.2 seconds.

I parallelized the encryption process because that was by far the slowest step. Encrypting a 512x512 image on 12 cores took more than 800 seconds (~14 mins)! However, since homomorphic encryption increases the size of the ciphertext by so much, the encrypted image was causing the processes to run out of memory.

Part of the problem was the client/server relationship causes the data to be duplicated in both. I did improve this by implementing streaming of responses and this was enough to fully complete the request/response for a 256x256 image. Processing of a 256x256 image took:

So an edge detection algorithm that was taking 200 ms blew up to an end-to-end time of 260 seconds when using homomorphic encryption. This is an increase of 3 orders of magnitude of runtime! I think the increase in memory usage is the biggest problem though since current computing world is more bound by RAM than by CPU.

While the blog post mentioned earlier is from 2009, I think the observation of the practical limitations of FHE still stands true. In addition to impracticalities of building a full boolean circuit for any program, I think there are limitations even in the use case of doing pure data processing. I think as long as the encryption process is so expensive, there are limited justifications for doing that heavy work on the client side only to delegate something less expensive to another untrusted system.